Sunday 24th November found 28 SWOG members and Po the dog meeting up below Mam Tor on a cool and cloudy morning. We ascended the paved pathway up to Mam Tor, regrouping at the trig point for a group photo. In light intermittent drizzle we then followed the ridge via Hollins Cross later taking a coffee break just below Back Tor.

Refreshed, we climbed back onto the main ridge to Lose Hill, then descended gradually close to Losehill Farm and along Edale Road into Hope. Here we dispersed: either sitting on a church wall to eat our sandwiches, taking tea and scones in a cafe or visiting the welcoming Old Hall Hotel where a good range of Theakston's ales were on tap.

After lunch, in drier conditions, we followed the path on the south side of the river emerging in Castleton. Next we headed up the rather wet and muddy Cave Dale, regrouping half way up for a final drink. Eventually emerging from our dale we followed field paths and lanes back to our cars. 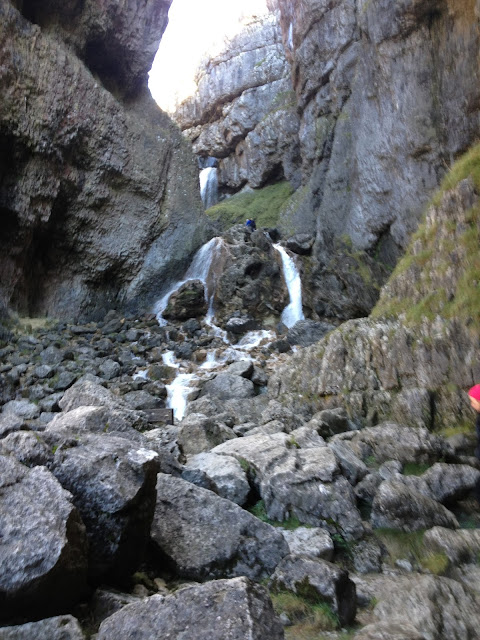 The re-enactment of Ken and my-self's first hostel weekend fifty years ago was initially somewhat marred by not being able to stay at Hartington Hostel for the first night, due to heating problems. We were however re-located to Ilam Hostel with a generous compensation package that everyone was happy with. We arrived at the hostel at various times and spent a very convivial evening meeting up with old friends, our tongues loosened somewhat by the wine kindly provided by Hartington Hostel. 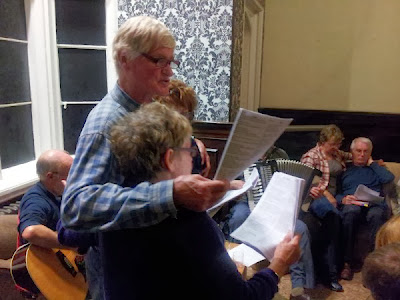 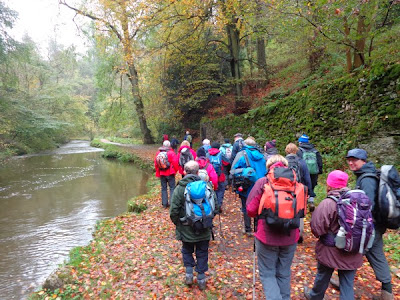 Although we had a rather a misty start and then about an hours rain, it was a rare opportunity to be able to walk the full length of Dove Dale. The river level was quite high so it made crossing the stepping stones quite exciting, but eventually we all arrived safely at Ilam Hostel. After a hearty Italian Buffet we got down to our evenings entertainment of an old fashioned Big Singsong. We were accompanied by Sue on ukelele, Geoff on guitar and John Pudduck on accordion. The songs were interspersed with jokes, monologues and poems, and my thanks goes to all the contributors. 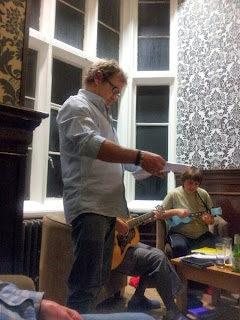 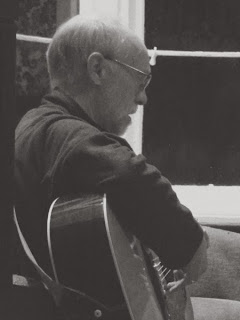 Sunday dawned bright and sunny, if a little cool, we soon warmed up however walking up hill past  Throwley Hall ruins. We negotiated several rather muddy fields before descending into the Manifold Valley for belated elevenses. The walk continued up the valley and over a rather slippery ford to Wetton Mill. Lunch and comfort breaks were taken here before splitting into two parties. One group went over the hills back to Hartington, whilst the other stuck to the valley until reaching Hulme End where we picked them up by car.
Altogether a most pleasant and entertaining weekend with some of the best food I have had in Youth Hostels. We will all be looking forward to doing a similar thing next year.